Well, didn’t this beer just burst onto the scene? If you’ve been active in the craft beer online community in recent months, you’ve almost certainly come across the vibrant, psychedelic bottle and the pink hued craft beer.

Dragons & YumYums, as the name may suggest, is a pale ale brewed with dragonfruit and yumberry. I was intrigued to see what sort of flavor profile a beer such as this would support, given the fairly mild flavors of a dragonfruit. I have no prior experience with a yumberry, but a google result provided the following information: A Yumberry, native to China and is a small, spherical fruit known for its red hue and sweet and tart flavor profile. Looking at the images, it reminds me somewhat of a lychee. 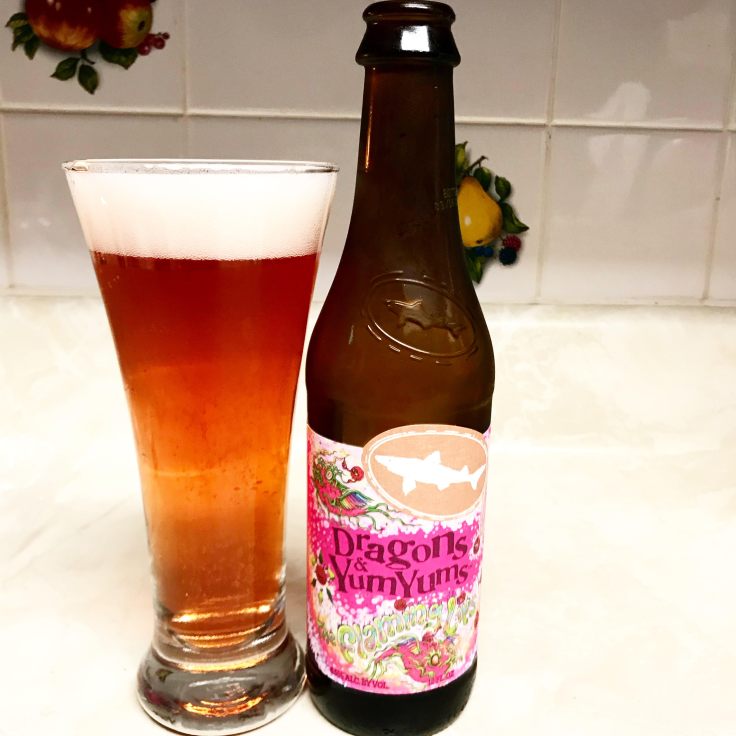 An explosion of fruit in every sip, Dragons & YumYums is an intensely tropical – yet subtlety bitter – pale ale brewed with a combination of dragonfruit, yumberry, passionfruit, pear juice and black carrot juice.

The beer is reasonably effervescent and produced a thick, foamy head. The aroma was fairly typical of a pale ale, with some of the fruit profile coming through.

By and large, the discussion surrounding this seasonal brew from Delaware’s Dogfish Head seems fairly positive. And honestly, I just don’t get the hype.

Mouthfeel wise, it was fairly light and its flavor profile was that of a decently made pale ale. That said, the fruit flavors were very washed out and disappointing. As noted before, I was somewhat skeptical about a beer pushing dragonfruit as a primary ingredient, given how mild and watery tasting it is.

The “subtle bitterness” promised by its write up is accurate, but that’s to be expected of a pale ale. Disappointingly missing was the “intensely tropical” flavors. Don’t get me wrong, this is a well made beer. As far as pale ales go, it’s well brewed and smooth. It’s just a shame that it’s a posterbeer of false advertising.

I am really struggling with the acclaim this beer is drawing. Is it that a brewery such as Dogfish Head, with a stellar lineup, demands recognition and praise? Is it an example of compliant fanboy-ism? Am I just not getting the point here?

Dragons & YumYums is a technically sound beer that just can’t meet the expectations placed on it (rightly or not). The packaging is cool, and its by no means a bad beer, but it’s hard to see past the promised experience that simply wasn’t delivered.

By all means, pick it up and try it for yourself. My negative view definitely seems to be in the minority on this one. Just don’t believe the hype. Go in with an open and mind.

What beer is overhyped? Comment below and let me know!