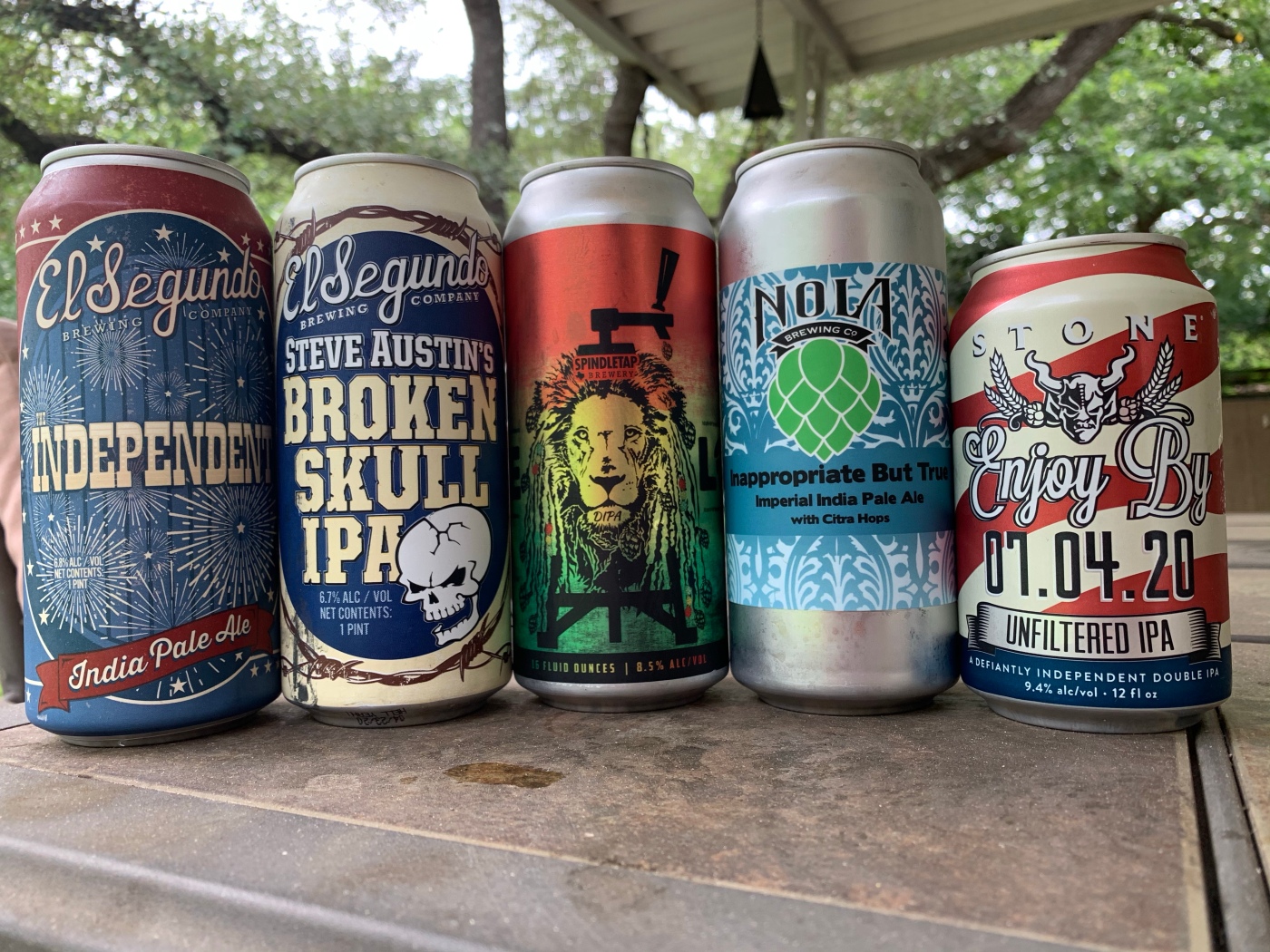 This week I made a trip to my local craft beer bar and picked up some tasty brews! Big ups to The Growler Exchange on Broadway, San Antonio, for stocking these tasty brews. And yes, two are from the same brewery. El Segundo is a more recent option in this market, and I’ve been trying to get my hands on their beers for some time.

Let’s get things kicked off with my most anticipated brew of the lineup!

Give me a HELL YEAH! My inner 90’s kid was pumped to check out this brew. Since knowing of its existence, I’ve been actively seeking a can of Broken Skull IPA. Luckily, it’s recently become locally available in San Antonio.

So, it’s an epic sounding brew with some serious star power behind it, but how good is it?

It pours a clear straw color and develops a decent head. Aroma wise, it gives off a fairy mild hint of hops, that linger in the nose.

Smooth and crisp, Broken Skull IPA offers a fairly pedestrian front end, but makes up for it with a piney hit on the back. The hoppy aftertaste persists without overwhelming.

Overall, this one is a tasty brew that rose to meet the hype. After wanting to check it out for some time, it’s definitely a solid brew. Those of you who were or are big Stone Cold fans can rest assured, this licensed(?) brew upholds the brand. I rated it 4.25/5 on Untappd.

NOLA is another brewery that has recently become much more available in the great city of San Antonio. I’ve come to really respect their brews, and always love Citra hops, making this a no-brainer to pick up.

It pours a slightly opaque color, with a sweet citrusy aroma. A decent head retains for a while. Smooth-bodied and slightly dry, it has a nice piney bite from the Citra hops. Clocking in at 7.3%, this refreshing brew will definitely sneak up on you!

Spindletap Brewing is quickly developing a powerful reputation for amazing NEIPA style brews in Texas. Their One Love serves their reputation well.

Pouring a hazy, washed out orange, a frothy head quickly recedes while projecting a citrusy aroma. Viscosity wise, One Love is light and thin but also somewhat creamy.

A well leveraged Simcoe hop bill supports a citrus forward brew with a nice hoppy bite. This delicious brew may be one of my favorites out of Spindletap. If you’re a fan of hazy brews, you need to check this out.

I rated Spindletap’s One Love IPA 4.5/5 on Untappd.

What a glorious time of year. Warm, long days and patriotic beer make for a great celebration of the US of A. Independent, by El Segundo is a light-bodied and crisp brew that perfectly suits this time of year.

Pouring a clear, straw color and building a solid head, Independent gives off quite a hoppy aroma.

The experience of drinking Independent is an interesting one. The brew is clean, thin and mild brew up front, with a nice hoppy rush on the backend. The result is an easy drinking and amazingly refreshing brew.

The balance between lightness and flavor is masterfully done, making this a great brew to celebrate another year of America with. At 6.8% it will make its presence known without completely wasting you. I scored Independent 4.25/5 on Untappd.

Another ode to the US, but Stone wants to celebrate by going hard in the paint! Stone and their Enjoy By IPA series have a well-earned reputation for amazing IPA. This one is no different.

Pouring a clear amber color, Enjoy By 07.04.20 builds a solid head that retains and laces throughout the experience. A dank, piney aroma sets the stage and peppers your nose a tad.

It’s a much thicker and heavier brew than El Segundo’s Independent, boasting a mid-body that’s very smooth. Dank hops are present throughout, building a very bitter flavor profile that persists well through the aftertaste. A mild sweetness helps to temper it enough to prevent from overwhelming.

This delicious beer is here to party. Clocking in at 9.4% ABV and 90 IBU, you’re going to feel it quickly. If a hop-bomb is your preferred way of celebration, this is an obvious must-buy for the fourth.

The Growler Exchange here in San Antonio is one of my favorite bars. This epic lineup of brews is a testament to the sort of brews available there. If you’re in San Antonio, TX, you need to stop by.

All-in-all, this haul created an amazing set of beer drinking experiences. If you’re able to locate any of these brews near you, they are all 100% worth checking out!

What is your favorite brew you’ve tried recently? Let me know if the comments below. Until next time, be sure to connect with me on Instagram, Facebook, and YouTube. Happy drinking y’all.