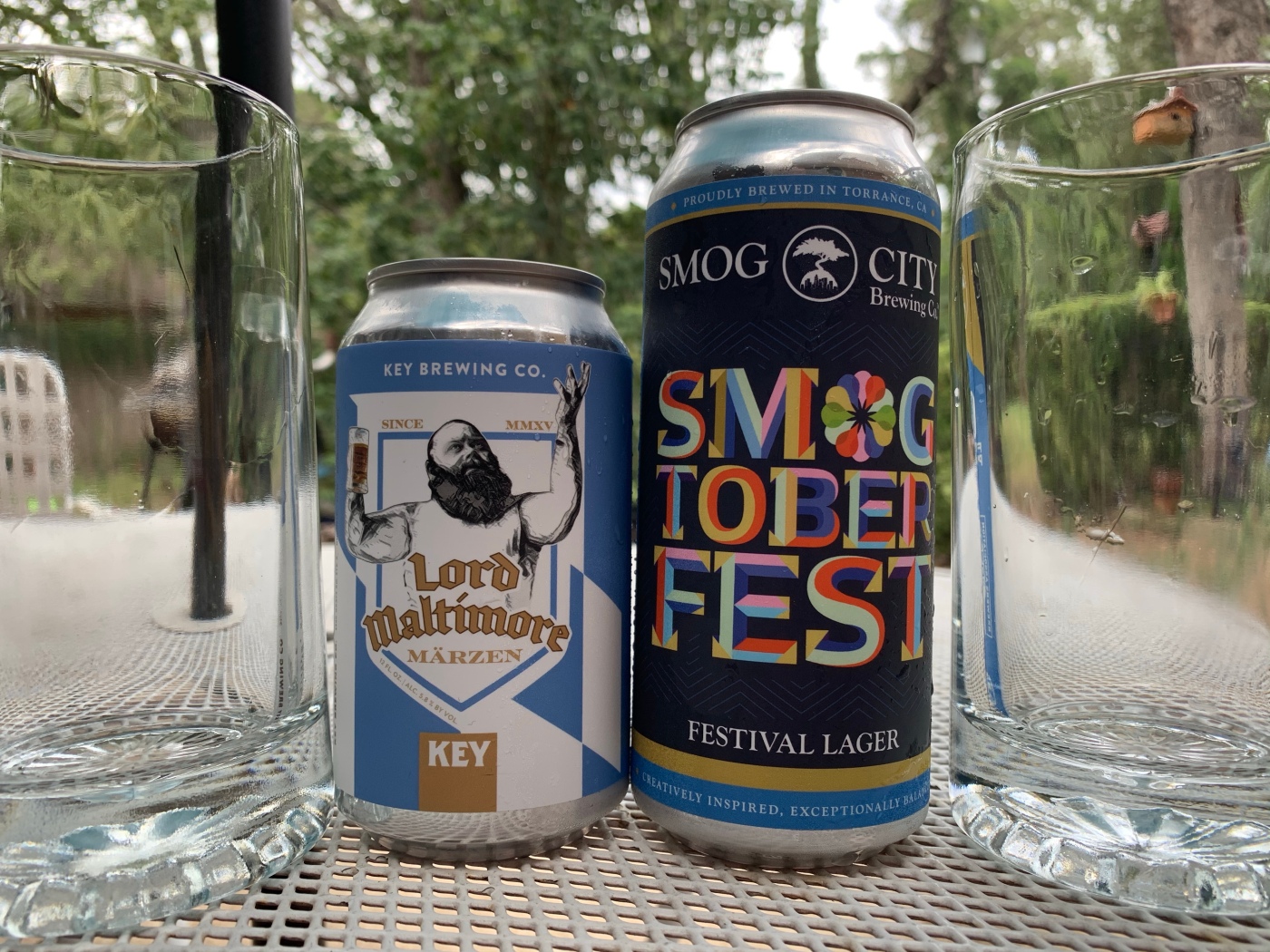 Master of Marzen 2020 rolls along with this Round 1, Bout 3 matchup between Key Brewing’s (MD) Lord Maltimore and Smog City Brewing’s (CA) Smogtoberfest.

Both of these beers are first-time entrants in the Master of Marzen, and I am excited to check them out. Without further ado, let’s get things underway!

As you can see, both cans are tremendously eye-catching.

Key have chosen to run with the typical colors and design elements of an Oktoberfest brew, including an epic pun related to their home in Baltimore, MD. This is a top class design in my view.

Smog City’s Smogtoberfest is also a really well designed can. Leveraging navy blue with a pop of Oktoberfest blue is a great way to set the tone. The super colorful typeface of their name is also aesthetically pleasing and eye-catching when compared to many of its peers.

That said, I can’t pass up Lord Maltimore’s clean and punny design. They take the Packaging design point in what is quite a competitive criterion. Running total: Key 1-0 Smog City.

Starting with Key’s Lord Maltimore, this brew offers a delightful aroma. Full of roasted malt, as would be expected given its hue, the tail end offers a slight sweetness. Warm and hearty, it leaves a slight tickle on the nose.

Smog City offers a much more subdued aroma. Malts are present, but quite thin on the nose.

Key takes this one too, offering a great example of the aromas that make the style. Running total: Key 2-0 Smog City

Most likely what all readers care about most, the third criteria is the ever important flavor.

Starting with Key’s Lord Maltimore. The front end flavor is much as I anticipated given its appearance. Lots of deep, toasted malt with a slightly dry finish. The aftertaste offers a subtle sweetness and retains a mild maltiness. A strong all-around experience.

Smog City’s Smogtoberfest is a much brighter brew. Offering a mild maltiness, and a very crisp close, this one strikes a solid balance between flavor and crush-ability. It doesn’t offer a whole lot in the aftertaste, but that clean and slightly sweet flavor always brings you back for another mouthful in rapid succession.

Another incredibly tough decision in the flavor department. While both are very strong takes on the style in their own right, I have to give the edge to Key here. Their Lord Maltimore is a more flavorful brew and is only slightly heavier. Both are great brews in their own right, however. Running total: Key 3-0 Smog City.

On mouthfeel, Lord Maltimore is actually quite light, considering its dark hue and strong aroma. It’s definitely on the mid-bodied side, but flirting with clean, crisp and thin. Smogtoberfest is an outwardly thinner brew, but it doesn’t sacrifice flavor to get there.

On head retention, Smogtoberfest holds a slight advantage here. It initially built a larger, stronger head than Lord Maltimore, and remnants of its head are still visible roughly half way down the glass, as pictured below.

As far as lacing goes, you can see in the above image that Smogtoberfest is the clear winner here.

Resounding winners on head retention and lacing, I think the mouthfeel is too close and subjective to rule against Smog City here. Running total Key 3-1 Smog City.

As in last year’s tournament, my Instagram followers have the opportunity to shape the decisions of each bout. In the 24hours directly preceding each bout, a poll is placed on my Instagram story. Whoever has the most votes when the poll closes, takes this fifth criteria. So how did it shape up?

Smog City took this People’s Choice handily, as you can see in the image above. Running total: Key 3-2 Smog City.

Two great beers entered, but Key Brewing’s Lord Maltimore was able to edge out Smog City’s Smogtoberfest 3-2. Key now progress to round 2 where they will take on The Brewing Project (WI).