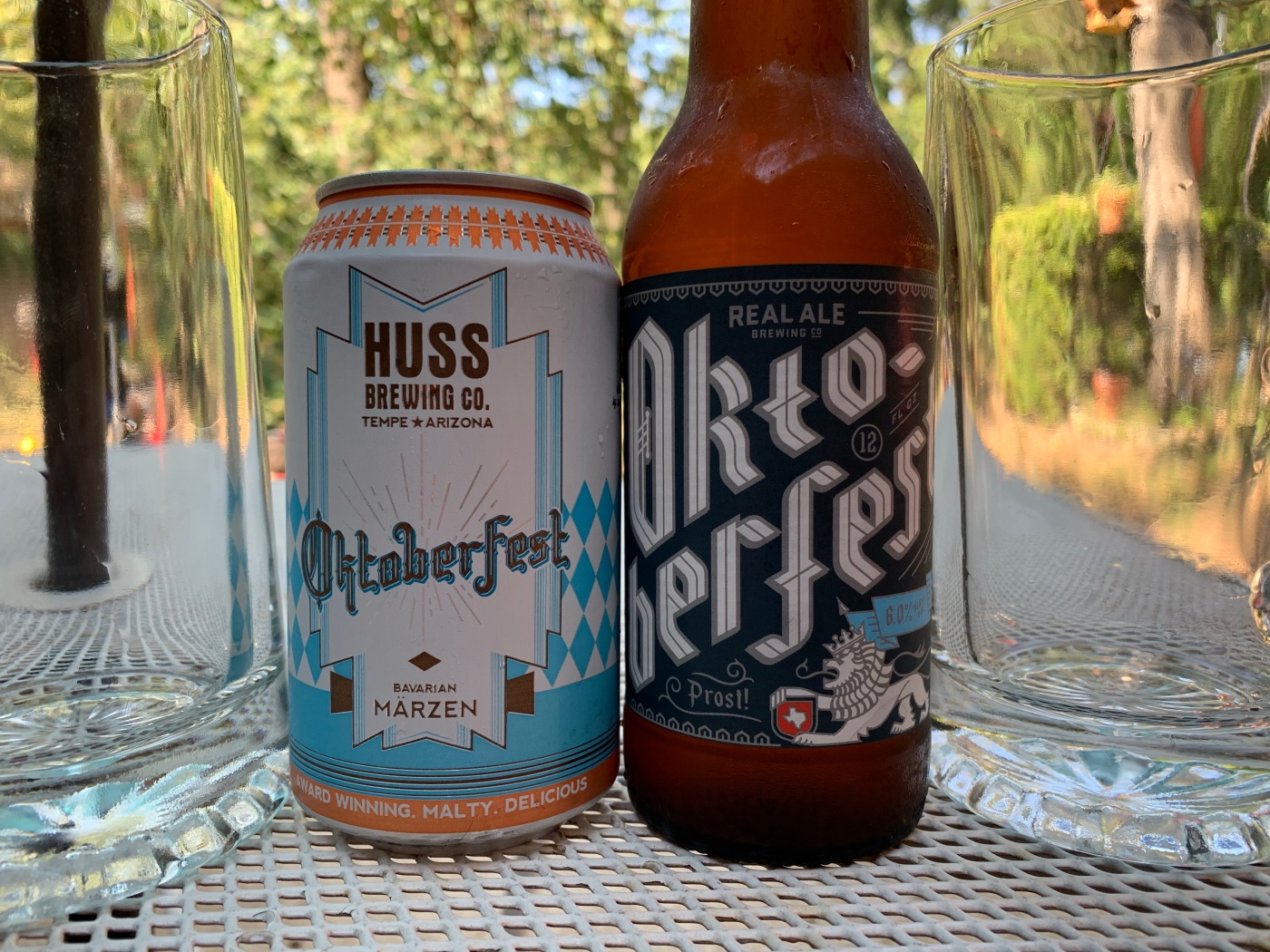 Another great bout in the Master of Marzen 2020 bracket, Round 1, Bout 11 will be my first time trying a Huss brew. Real Ale, on the other hand, is a staple of Texan craft beer and one of the breweries that first got me interested in craft. Let’s get things going!

When considering the packaging of these brews, the first thing that leapt out at me was the almost identical font used for “Oktoberfest” on each brew.

Huss has opted for the traditional Oktoberfest white and light blue diagonal checkerboard design. A pop of their branded orange around the top and bottom create a nice contrast to the main body.

Real Ale redesigned their Oktoberfest packaging since last season. Their primary use of navy with white text and a tiny pop of the lighter Oktoberfest brew is a clean, minimalist design. They also elected to include a European style lion, holding a shield with the image of Texas on it, a nice touch!

I think Real Ale takes a slight edge here. The clean, minimal design is a great touch and would likely standout on a shelf of Oktoberfest brews. Running total: Huss 0-1 Real Ale.

Huss’s Oktoberfest offers a deep, malty and sweet aroma as expected looking at its dark hue. It’s as close to the prototypical Marzen aroma as I’ve experienced. Truly amazing.

Real Ale’s Oktoberfest is a much lighter appearing brew, and those properties definitely translate to the aroma. It offers a sweeter aroma with a lighter malt profile and a touch of earthiness. It smells like a great time is on its way.

The aroma criterion goes to Huss. While Real Ale’s take is a tasty smelling brew, the deep malty tones of the Huss are textbook Marzen. Running total: Huss 1-1 Real Ale.

Kicking off with Huss’ offering. A rush of deep, powerful malty flavors greet the tastebuds. The backend doubles down on the toasted malt, while introducing a touch of earth and sweetness. A very tasty brew indeed.

Real Ale’s Oktoberfest brew is much lighter, but also quite flavorful. The malts are brighter and a bit sweeter. A higher effervescence make this a very easy drinker.

As with the aroma, I have to give this point to Huss. It offers a prototypical and robust malty marzen experience. Running total: Huss 2-1 Real Ale.

Starting with mouthfeel, Huss is mid-bodied and smooth. It boasts a tremendous flavor profile and manages to do so without being very heavy and bloating. They’ve really managed the best of both worlds here.

Real Ale’s beer is lighter and crisp, but also holds a solid flavor profile. It’s a bit more effervescent and sweet than its counterpart..

On head retention, neither did much. Both built a head, but they also both receded quickly. No clear separation here.

Regarding lacing, both have demonstrated some capacity to lace. As you can see in the image above, there isn’t much separating the two.

Given the head retention and lacing being pretty much tied, mouth-feel is the deciding factor here. Again, I have to side with Huss. Their Oktoberfest is a top-flight marzen that executes the fundamentals tremendously. By matching a smooth and highly-drinkable mouthfeel with a deep and powerful flavor, they’ve edged out Real Ale’s brew which is a well crafted brew in its own right. Running total: Huss 3-1 Real Ale.

As in last year’s tournament, my Instagram followers have the opportunity to shape the decisions of each bout. In the 24 hours directly preceding each bout, a poll is placed on my Instagram story. Whoever has the most votes when the poll closes, takes this fifth criteria. So how did it shape up?

Real Ale were convincing winners of the people’s choice in this bout, as you can see in the image above. Running total: Huss 3-2 Real Ale.

What an awesome bout. Real Ale made a tasty and highly drinkable brew, but Huss executed flawlessly on the fundamentals of a traditional marzen and snuck through 3-2 victors. They now progress the second round where they will meet Double Nickel Brewing.