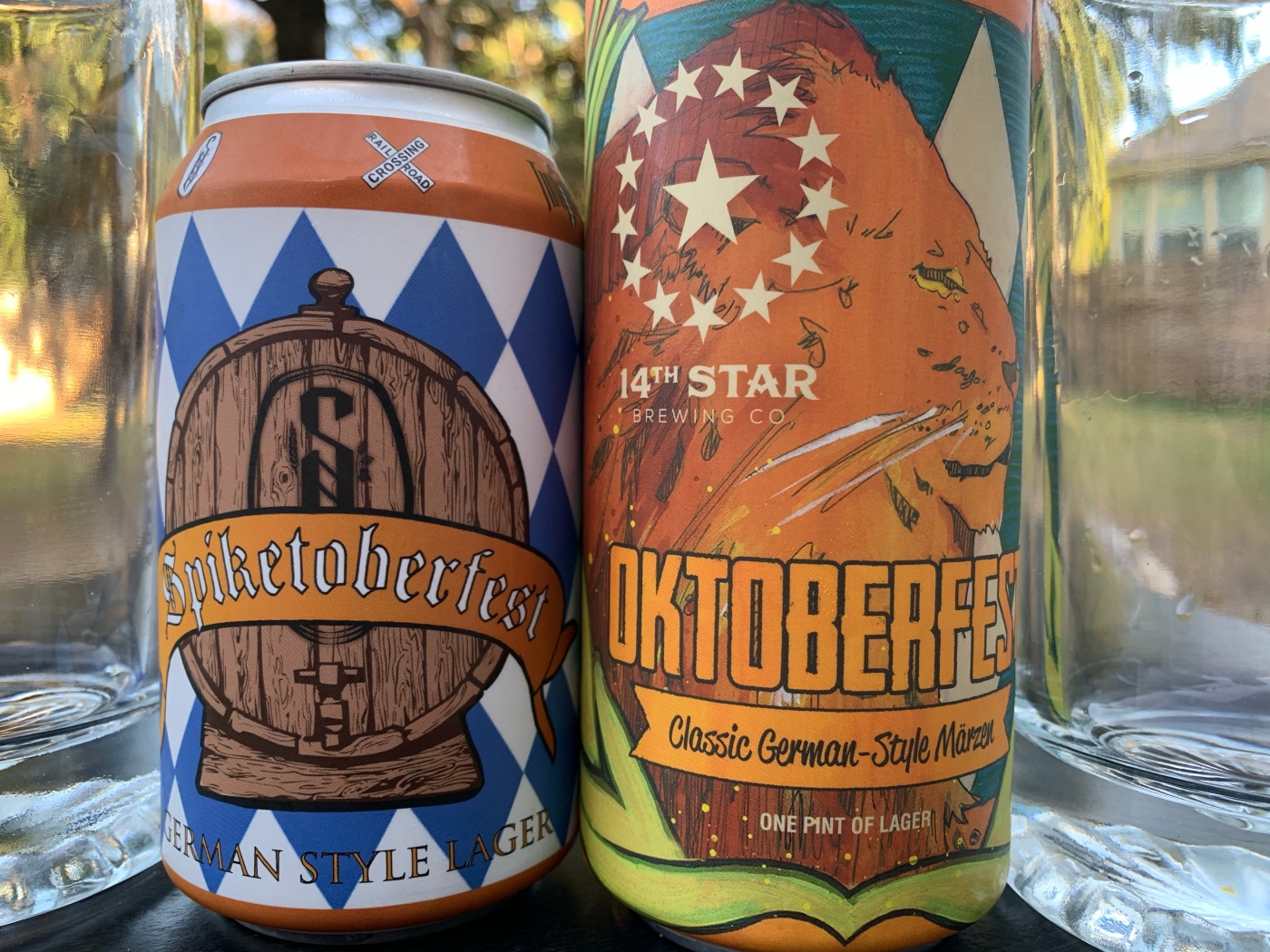 Both of these first-time entrants have crafted amazing seasonal brew, so this one will be an awesome bout. Let’s get things going.

Check out the Round 4 draw.

Both breweries lean into the Oktoberfest motif, but take a slightly different path towards it.

Twisted Spike’s Spiketoberfest features a wooden keg in front of the Bavarian check flag. A great touch on the traditions of this season.

14th Star’s Oktoberfest centers on a large lion, the symbol of Bavaria, in front of the Oktoberfest blue-on-white check. A less traditional take (given the style of the lion) but a visually appealing one for sure.

Twisted Spike’s Spiketoberfest offers a wonderfully powerful aroma. Malt-forward and warm, it offers a slight spice and a touch of sweetness. An incredibly well balanced aroma.

14th Star’s Oktoberfest also offers quite a malty brew. It isn’t as warm or sweet, instead leaning into the slight earthiness of the toasted malt and a touch of hop. It isn’t quite as powerful either, when compared to Spiketoberfest.

Again, there’s two tremendous smelling brews but can only be one winner. This point goes for Spiketoberfest as it has a more powerful and slightly more complex aroma overall. Running total: Twisted Spike 1-1 14th Star.

Spiketoberfest is certainly not lacking flavor. Opening thin and mild, a rush of smooth, malty flavor soon takes over. The aftertaste is quite bitter, but pleasantly so. It also retains a slight sweetness. There is no discernible build in the aftertaste, instead maintaining a well-balanced experience. Excellently done.

14th Star’s Oktoberfest also opens thin and mild. It’s backend offers a more tempered, but very enjoyable malt flavor. Surprisingly, it has a lower bitterness than Spiketoberfest. A mild aftertaste of slightly sweet malts retains, supported by a touch of bitterness over time. This one is also a tremendous experience.

So where do we go from here? Spiketoberfest brings a tender brutality in really pushing the flavors without overbalancing. 14th Star significantly more subtle, but expertly balanced. After a little more deliberation, I’m giving a tiny edge to 14th Star. Running total: Twisted Spike 1-2 14th Star.

Working backwards from my usual order of sub-criterion, you will see below that Spiketoberfest laces markedly better than its competitor. As neither really retained a head, Twisted Spike holds a slight lead heading into the consideration of mouthfeel.

Spiketoberfest is thin and smooth, but not lacking flavor. It has a low-to-mid carbonation that aids it’s refreshing factor without bloating. A very nice experience.

14th Star’s brew is a bit heavier, but also a little smoother. It has a very low carbonation point, making it insanely easy to drink. The mix of crisp hops and soft sweetness is a nice touch for aiding the mouthfeel overall.

I’m giving the slight edge to Spiketoberfest because I think the touch of carbonation really sets it ahead. The mild “heat” is a welcome part of the experience. Running total: Twisted Spike 2-2 14th Star.

As in last year’s tournament, my Instagram followers have the opportunity to shape the decisions of each bout. In the 24 hours directly preceding each bout, a poll is placed on my Instagram story. Whoever has the most votes when the poll closes, takes this fifth criteria. So how did it shape up?

As you can see above, Twisted Spike were able to pull ahead and take the People’s Choice this time around. Running total; Twisted Spike 3-2 14th Star.

Another very competitive bout sees Twisted Spike take its place in the final 4. They’ll meet the winner of Paulaner vs. Double Nickel in the semifinals.

Check out the Round 4 draw.