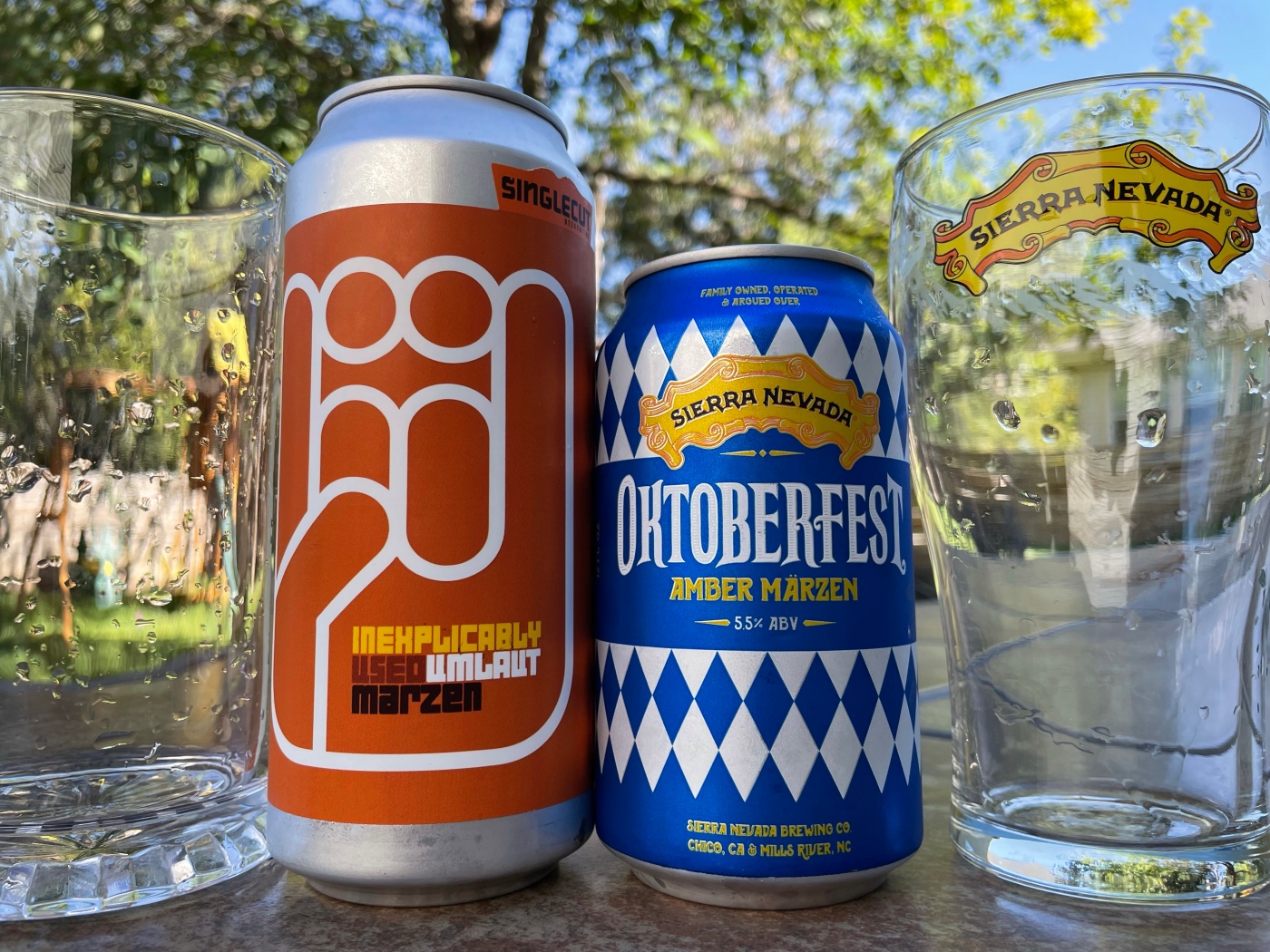 This is the first time either brewery has entered the Master of Marzen tournament. I’m familiar with Sierra Nevada, but this will be my first experience of SingleCut. I’m exited to see how this plays out, let’s kick things off.

There’s two very different takes on the can design here.

SingleCut’s Inexplicably Used Umlaut (referred to as Umlaut from now on) uses a minimal design to great effect. A vibrant orange can features a hand making a gesture, with an umlaut placed above the folded middle and ring finger. It’s an unusual design, but it’s executed flawlessly.

Sierra Nevada’s Oktoberfest leans into the Bavarian check with their famous branding over the top. It’s a classy implementation of the tradition and catches the eye.

While I very much enjoy Sierra Nevada’s can design, I can’t get past the impressive label on SingleCut. This one goes to Umlaut. Running total: SingleCut 1-0 Sierra Nevada.

Umlaut offers a mild and malty aroma. It’s toasty and slightly warm, with a slight heat sitting on the nose.

The edge has to go to Sierra Nevada here, as the aroma of their brew is both more intense and more complex. Running total: SingleCut 1-1 Sierra Nevada.

Umlaut is a consistently flavored brew, offering an intense toasted malt flavor. It’s quite dry throughout, leading to a quite bitter, but impeccably balanced, aftertaste that retains a builds a little between sips. The dry nature of the aftertaste leaves me excitedly anticipating more.

Sierra Nevada’s Oktoberfest opens quite mild, but sees a sharp rush of sweet and floral malts on the backend. The sweetness holds in the aftertaste but does not built. A slight earthiness tempers the flavor.

While I found the complex phases of flavor in Sierra Nevada quite enjoyable, the edge goes to SingleCut here. It’s uniformly intense in its flavor, but that flavor is truly superb. Running total: SingleCut 2-1 Sierra Nevada.

Umlaut is a mid-bodied and smooth brew with a relatively low carbonation point. Its dryness, coupled with its smooth mouthfeel, makes it quite a crisp and refreshing experience.

Sierra Nevada’s Oktoberfest is a little lighter, but still a mid-bodied and smooth brew. A slightly higher carbonation adds some refreshment, making the mouthfeel section here a dead heat.

As you can see above, both are comparably colored brews with similar translucency. Sierra Nevada’s brew is a touch darker. When it comes to head retention and lacing, Sierra Nevada is the the clear winner.

Given how similar the mouthfeel was, I feel I have to side with Sierra Nevada as their head retention and lacing was the major differentiator. Running total: SingleCut 2-2 Sierra Nevada.

And now we head to the People’s Choice poll, conducted on my Instagram story, for the deciding point. Let’s see how that went.

The Sierra Nevada army were out in force here, seeing their preferred brewery take 69% of the vote. Running total: SingleCut 2-3 Sierra Nevada.

Two excellent brews in this one, but unfortunately only one may progress. Sierra Nevada now heads to Round 2 where they’ll meet the winner of Panther Island vs. Real Ale.