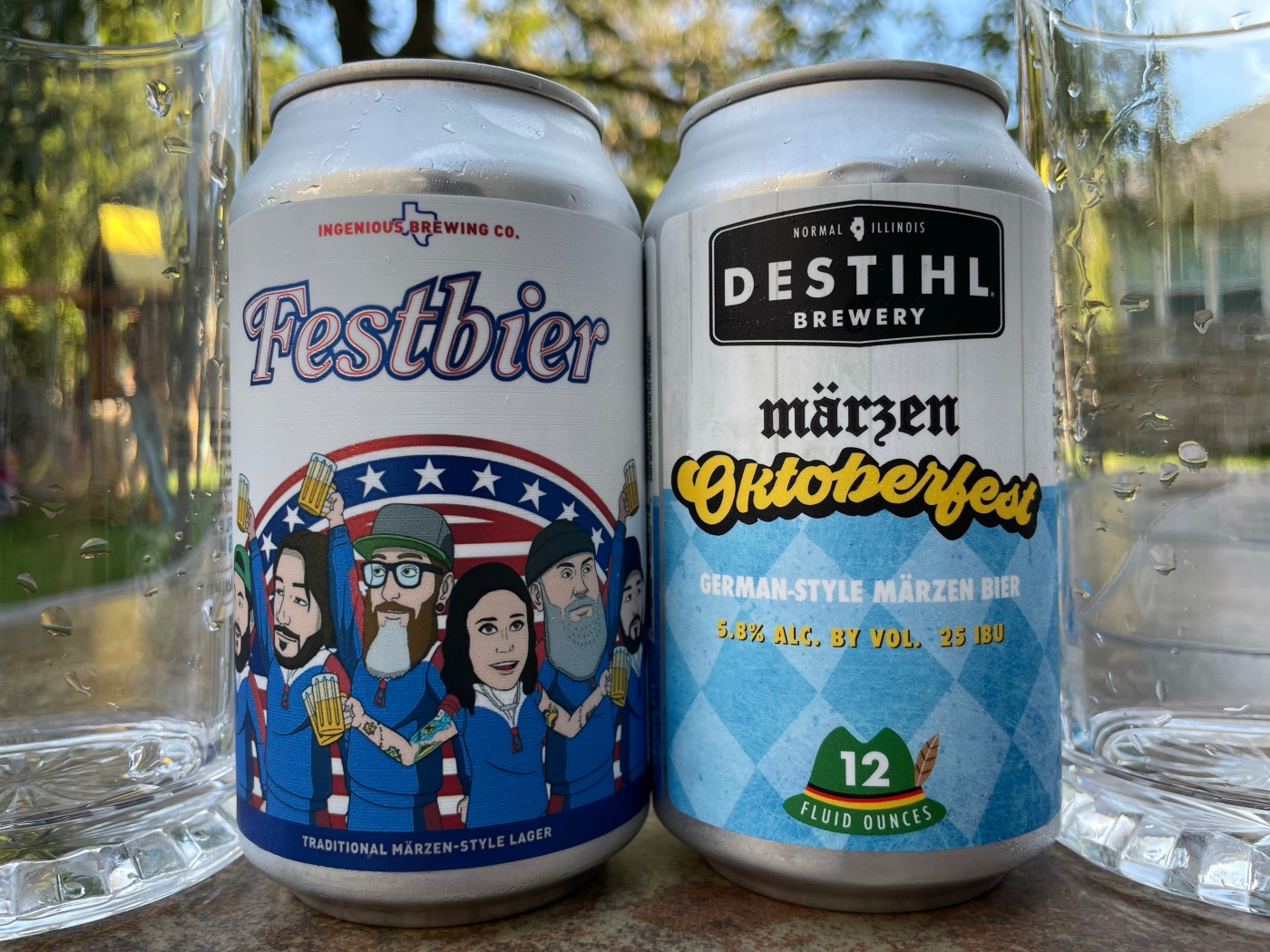 This is the first time either brewery has entered Master of Marzen, so this one should be a ton of fun. Let’s get it going.

Ingenious’ Festbier features a design which I can only assume is inspired by the movie Beerfest. A group of people in matching tracksuits stand in front of an American-themed backdrop. It’s a really cool nod to an entertaining movie.

DESTIHL’s Oktoberfest has a clean and pleasant designed can with a nod to the traditional Oktoberfest check. A light-blue on darker blue base and ample white space is a smart and sleek way to design the can.

I really like both designs, but have to give this point to Ingenious based on the novelty factor. Running total: Ingenious 1-0 DESTIHL.

DESTIHL’s Marzen offers a slightly lighter aroma that is particularly sweet. A smooth sweetness holds on the nostril.

Two tasty smelling brews here. It took a little bit of time to separate them, but in giving this point to Ingenious as they have a more powerful brew. Running total: Ingenious 2-0 DESTIHL.

Ingenious’ brew opens with a bang. A deep malty profile slams the tastebuds. It’s quickly followed by a slightly sweet but exceedingly bitter flavor profile. The bitterness dominates the aftertaste and builds between sips. The drinking experience is analogous to a very malty hop bomb DIPA. It’s an enjoyable experience in its own right, just not what I expect from an Oktoberfest seasonal.

DESTIHL’s brew is a much more expected experience. It has a consistent flavor profile throughout, with a deep malty backbone that’s slightly sweet and pleasantly bitter. It’s an excellent take on the style, though dryer and more bitter than many.

Probably unsurprising that I give the edge to DESTIHL here. Running total: Ingenious 2-1 DESTIHL.

Ingenious’ brew is mid-bodied with a low carbonation that is reasonably smooth, save for the bitter bite. DESTIHL’s brew is a pleasantly light brew in comparison. It has a low-to-mid-carbonation but is exceptionally smooth drinking.

As you can see above Ingenious’ brew is considerably darker. Both are quite translucent. Both retained some foam but didn’t lace much. A very slight advantage in foam density and spotty lacing goes to DESTIHL here.

Primarily based on drinkability, but with some support on head retention and lacing, I’m giving this one to DESTIHL. Running total: Ingenious 2-2 DESTIHL.

Now we move onto the People’s Choice which is decided by public poll on the sargentsuds Instagram story.

As you can see above, this was a particularly tight poll. In the end, DESTIHL takes the point with 52% of the vote.

A tight contest was decided by a narrow margin in the dying seconds. DESTIHL now progress to Round 2 where they meet winner of East Brother Beer vs. Austin Brothers Brewing.