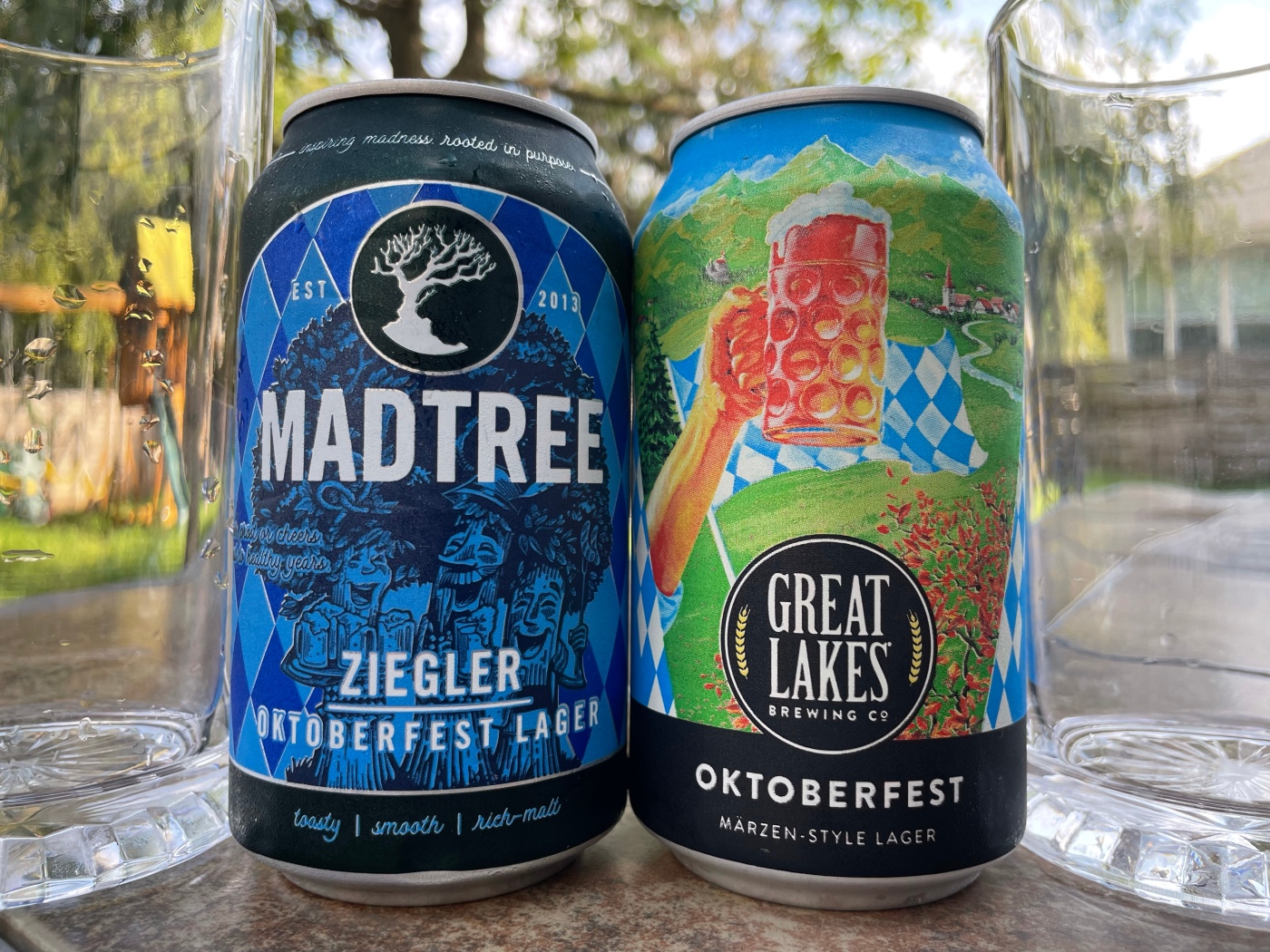 Both of these Ohioan breweries are first time entrants in the tournament. MadTree progressed from their first-round bout with Southern Star and Great Lakes managed to best Call to Arms. Let’s get this bout rolling.

Both breweries have opted for a version of the traditional Oktoberfest design.

Great Lakes’ brew features a very European looking, lush green valley with a small village in the background. Bavarian check and a large stein of beer occupy the foreground.

I enjoy both labels, but have to give the edge to MadTree for creating a sleek and modern take on the traditional design elements. Running total: MadTree 1-0 Great Lakes.

Ziegler offers an aroma of medium intensity. A deep, malty backbone creates a largely earthy aroma with a nice warmth that lingers on the nose.

Great Lakes’ brew offers a mild aroma. A malty base has borderline clovey elements and a slight warmth.

Both of these are interesting smelling brews, but on the balance of intensity, and a slight preference for component elements, I’m giving this edge to MadTree. Running total: MadTree 2-0 Great Lakes.

Ziegler opens slightly mild, but soon sees and intense and malty flavor rush into the backend. The earthy qualities of the malts dominate the aftertaste and are accented by a very slight sweetness. The earthiness retains and builds a touch between sips.

Great Lakes’ brew is uniformly flavored from front to back. Earthy, dry and crisp, a slight earthy bitterness holds on the backend but doesn’t build much.

Subjectively, after further deliberation, a slight edge goes to Great Lakes for the way their brew is balanced. Running total: MadTree 2-1 Great Lakes.

Ziegler is a mid-bodied brew with a medium level of carbonation. The balance between both elements makes a pleasant experience that is both refreshing and smooth. It’s an excellent brew.

Great Lakes’ brew is a bit lighter and slightly more carbonated. It’s a refreshing brew, but it may bloat a tad overtime.

As you can see above, Ziegler is a darker brew, though both are fairly comparable in terms of translucency. Ziegler holds a slight edge on head retention but neither really stood out with lacing.

With mouthfeel being the true differentiator here, the edge has to go to MadTree. The mix of weight and carbonation is expertly balanced making it a smoother brew overall. Running total: MadTree 3-1 Great Lakes.

The fifth criterion is awarded based on public polling results. Let’s see who is the People’s Choice.

Two excellent brews entered, but only one can progress to Round 3. Today that’s MadTree who will next meet Zero Gravity.