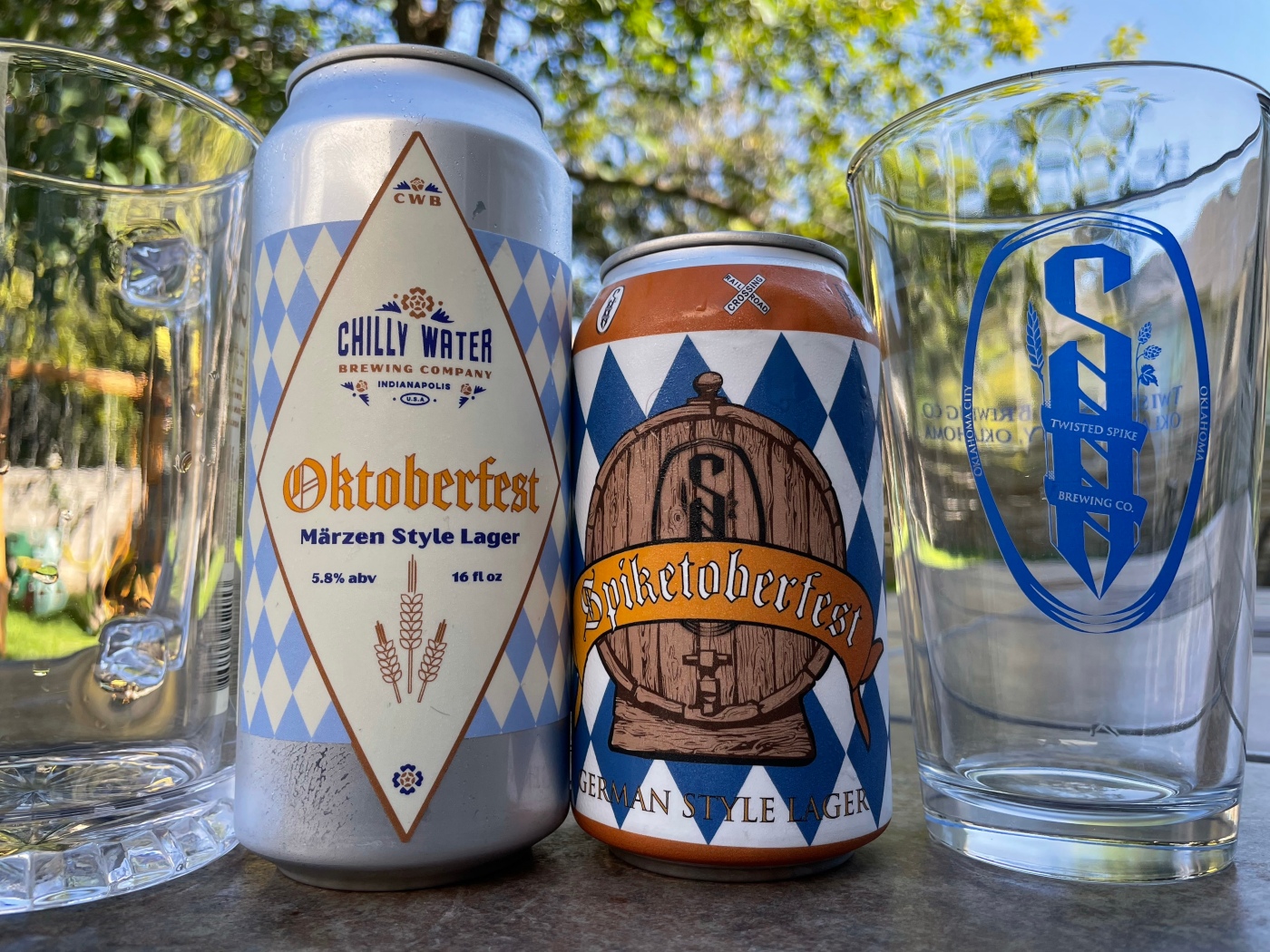 Chilly Water are first-time entrants in the tournament, having progressed against Sketchbook Brewing in the prior round. Twisted Spike are second-time entrants and defending Master of Marzen Champions who qualified after a Round 2 Bout against MobCraft. Let’s finish up Round 3 with a bang.

Chilly Water’s label leverages interesting shapes, a Bavarian-check background and ample empty can space at top and bottom. The mix of softer colors and clean angles makes it quite eye-catching.

Twisted Spike’s Spiketoberfest also leverages a Bavarian-check background. It features a giant wooden keg, such as those at the Oktoberfest festival, prominently. Yellow borders and branding stand out against the background.

Both are interesting spins on tradition, but I’m giving the edge to Chilly Water. Their use of space and angles makes it particularly eye catching. Running total: Chilly Water 1-0 Twisted Spike.

Chilly Water’s Oktoberfest has a particularly intense aroma. Warm, earthy and malty, it sets the tone for what should be a very tasty brew. The warmth lingers on the nose and clears it well.

Spiketoberfest also offers quite a strong aroma. The toasted malts possess an excellent mix of sweet and earthy qualities. It is also somewhat warm, just not as much as it’s counterpart.

After a few more sniffs, the differentiation of two comparably intense brews rests in their component qualities. This one has to go to Twisted Spike as the mix of sweet and earthy is truly tremendous here. Running total: Chilly Water 1-1 Twisted Spike.

Chilly Water’s Oktoberfest is a powerhouse of a brew, offering a deep and intense flavor from front to back. Sweet and clean, a perfect amount of earthiness rounds it out. The backend starts as sweet and earthy, seeing the sweetness recede quickly and end up in a clean and earthy flavor that retains but does not build.

Spiketoberfest is also a uniformly intense flavor throughout. The deep, malty backbone also sees a good mix of sweet and earthy, though the earthiness makes up more of this experience than Chilly Water’s. A cleaner, less intense aftertaste remains.

I think the edge goes to Chilly Water here. Both are tasty on the front and back, but I found theirs to be a preferable experience on the aftertaste. Running total: Chilly Water 2-1 Twisted Spike.

Chilly Water’s brew is mid-bodied, soft and clean with a mid-level carbonation. The result is a great vehicle for flavor that’s quite refreshing.

Spiketoberfest is a lighter-bodied and lower carbonation brew. It’s an excellent vehicle for flavor that’s amazingly easy to drink.

As you can see above, Chilly Water’s brew is slightly darker on coloration, but both are quite translucent. Neither did much on head retention, but Twisted Spike laces much better.

Each brew has a different mouthfeel, but each are comparably enjoyable. With that said, the differentiation lies in the lacing. Twisted Spike takes this point. Running total: Chilly Water 2-2 Twisted Spike.

Tied at 2-2, the People’s Choice poll will decide the winner. Let’s see who took the point.

A tight battle is settled in the dying moments through public polling. The defending champs, Twisted Spike, live on and will next meet East Brother in Round 4.